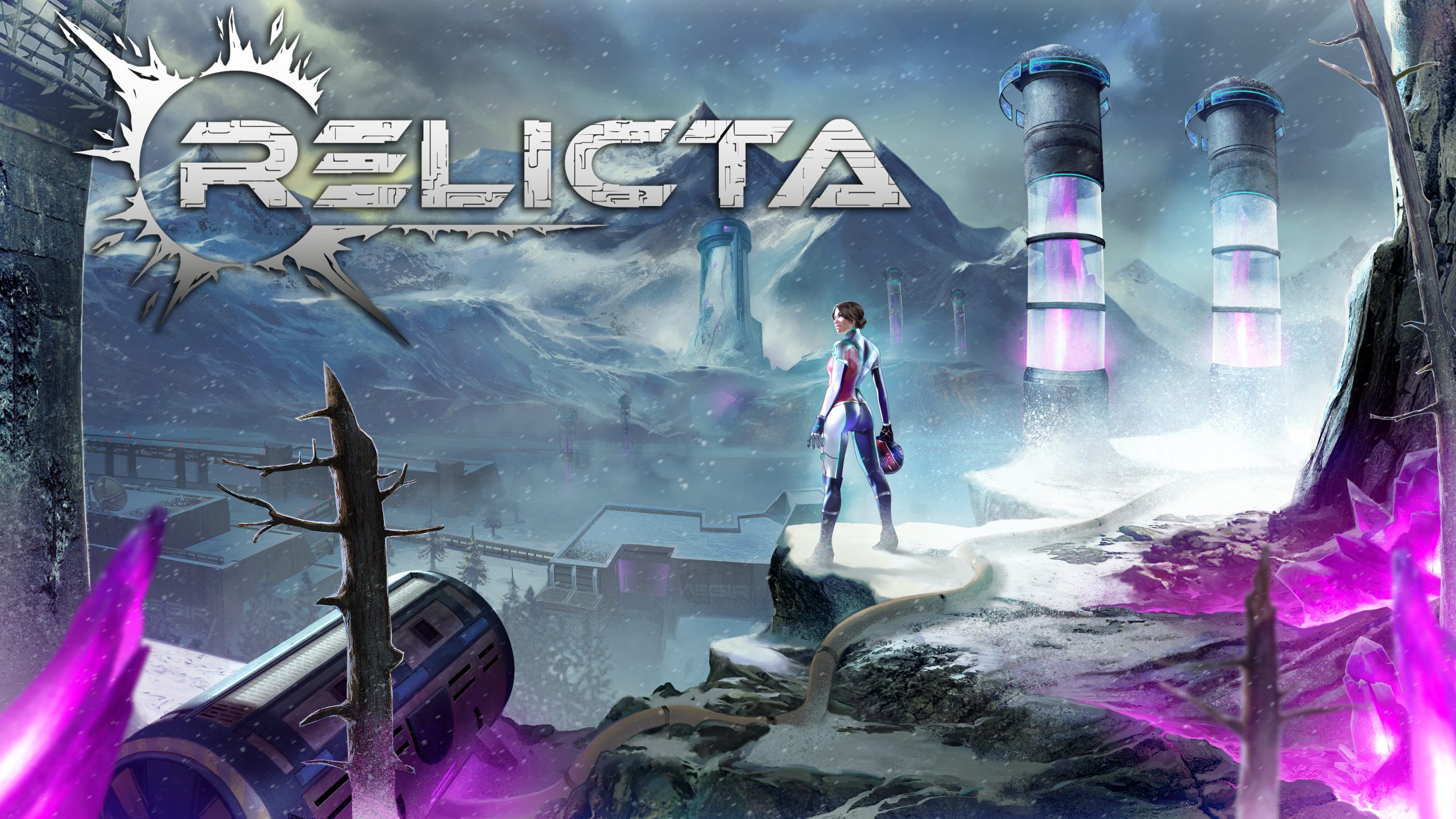 Relicta is a strong first outing for Mighty Polygon, a Spanish developer formed in 2015. A puzzle game to the core, Relicta will ask much of you as the player. If you dive in to Relicta, you’ll find a confident first person puzzler, uninterested in hand holding, and ready to challenge you. Its up to the task.

Relicta takes place in the future. You are renowned physicist, Dr. Angelica Patel. Dr. Patel spends her days on Chandra base, located on the moon, researching terraforming, magnetism, and gravity. Through years of work, distinct biomes thrive in the moon’s craters. Each of these craters contain a series of tracks, essentially ever evolving obstacle courses, dealing with the magnetism and gravity experiments Patel and her team have been working on. The way these puzzles are structured really set Relicta apart from a good many puzzle games.

Dr. Patel is equipped with Gravity Gloves, allowing her to change the polarity and gravity of boxes and landing pads around her. The puzzles work like this. You’ll enter one of the biomes and walk until you find a blue force field. Once you pass through, it’ll turn red, and solving the puzzle is the only way out. All of these will involve moving boxes on to pressure plates to open various force fields. Initially I groaned audibly cause I’ve been moving boxes on pressure plates since the late 90’s. But after I did the first couple puzzles, I found these boxes a pleasure to move. Movement is snappy and directing them around the large puzzle rooms is intriguing. Through changing the polarity of the magnetized boxes and manipulating the space around them a humbling assortment of difficult puzzles emerges. Harnessing this magnetism is the only way to succeed.

When I started, things felt a little slow. Part of that is introducing the fairly complex mechanics of the puzzles. Using magnetism and gravity to weave a box along a path in the air will become common place toward the end of the game, but a good deal of the starter puzzles are there to teach you that complexity. Boy, does that complexity grow! It was a fairly common reaction to enter a new room, start to investigate, and completely be at a loss for how I would move the box at the beginning of the puzzle to the end. The rooms are huge and can be quite daunting. But pausing and whittling down one section at a time proved time and time again to be the best way forward.

That complexity felt like it was constantly rubbing up against me on my playthrough. I love this element of puzzle games. Being stuck is often a positive thing for the player, unlike most other genres. Some of my fondest moments from Relicta saw me overcoming a problem after a long time spent working on it. The best puzzle games offer this, and so does Relicta. I would often spend a bit too long on a section only to get frustrated. This would lead to the inevitable curse filled rant at which point I would quit. After thinking on it and returning, what was once a daunting task, seemed a little less so. If you enjoy rubbing up against complex problems that will make your brain hurt, Relicta is good for that.

As you progress through the game, you’ll have plenty of time to learn about Dr. Patel’s relationship to her daughter and her team, as well as the history of Chandra base. There’s a good deal of tension and surprising moments that offered a nice incentive for the puzzles. The story, voice acting, and score really pushes you forward and work together well to elevate the good puzzler that’s already there.

Aside from the mechanics of the puzzles and the story, the level design is fiendish in the way the rooms twist and turn on each other. The spaces are wide open, with a brilliant use of 3D space and verticality. The requirement to keep your head on a swivel never leaves. There were a number of times I would think I had everything figured out and I had forgotten to look up. Often times the answers are hidden just out of site. I enjoyed finding something in a conspicious area, and consistently had that little smirk on my face, silently congratulating the team at Mighty Polygon for giving me such a nice challenge.

All this wonderful complexity is a great thing, but I did find some elements felt a little burdensome. The one thing I kept circling back to was the save feature. Saving is handled by an auto-save only, which saves at the start of each new puzzle. There is absolutely nothing wrong with this at the beginning of the game since the puzzles are less complex. As the game progresses, I found myself in some multi-room puzzles that proved extremely tedious if I needed to reset the puzzle. The reset would take me back to the beginning. If I have a five step puzzle, and can perform steps one through three flawlessly, needing to reset to the beginning amounted to a good bit of wasted time. Its not a deal breaker by any means, but did hamper my enjoyment at some key moments. I understand the reasoning behind this, needing to reset in the event of an irreversible mistake for example, but the option of a manual save while keeping the auto-save as a reset option would have lowered my frustration.

Relicta is typically great about showing exactly what you can do and how things work. This being a complex physics based puzzler, that exactness is a requirement. There were a few moments, however, that seemed to get really busy visually, and I couldn’t tell you how I managed to solve the puzzle. One particular instance saw me sending anti-gravity boxes from one room to the next across a bridge. Once they were across, I needed to plan out the polarity of each box so I could manipulate them into attracting or repelling toward a pressure plate. Somehow I managed to solve this puzzle, but I couldn’t lay out for you the exact way I did it. These opportunities of extreme trial and error are rare, but they can pop up.

The linearity also bothered me, but I understand this is strictly a matter of taste. If you are stuck on a puzzle, you will remain stuck on that puzzle until you figure it out. As I was playing I was thinking how nice it would be to have a group of puzzles I could bounce between in a biome to decrease that feeling of a stuckness. Where as this would be great, the more I thought on it, I don’t see it as a good solution. I am not so sure there is a solution to this, its most likely a “me” problem.

Each new puzzle in Relicta is a slight evolution of what preceded it. A more open approach would tamper with the delicate learning curve the team at Mighty Polygon built in to Relicta. I think its best to know what to expect and be comfortable taking pauses. Its definitely a game that benefits from time away so you can think through a puzzle. Those eureka moments are some of the best parts of a good puzzle game. Relicta is full of them.

Relicta is a good puzzle game that instantly feels like it was made with thoughtfulness and passion. The level of care put into the puzzles and the story is easy to recognize.
While the puzzling is strong, I did feel frustrated by some design choices and these did lower my enjoyment of the game. As a puzzle game, Relicta has a lot to offer.